Tokyo is a surprisingly colorful city, filled with all types of nature. As photographers, nature is always a favorite backdrop, whether it’s a family photoshoot, a maternity photoshoot or a pre-wedding or engagement photoshoot. Throughout the year there is usually something seasonal and colorful to incorporate into our images which help to frame the subjects, and tell the story about that particular time of the year. We have compiled a list of flowers; from the iconic Sakura Cherry Blossom and “Koyo” (autumn/fall foliage colors), to lesser known but equally whimsical Wisteria and Cosmos. Depending on the time of the year, we have easy access to all of these colors right here in central Tokyo! 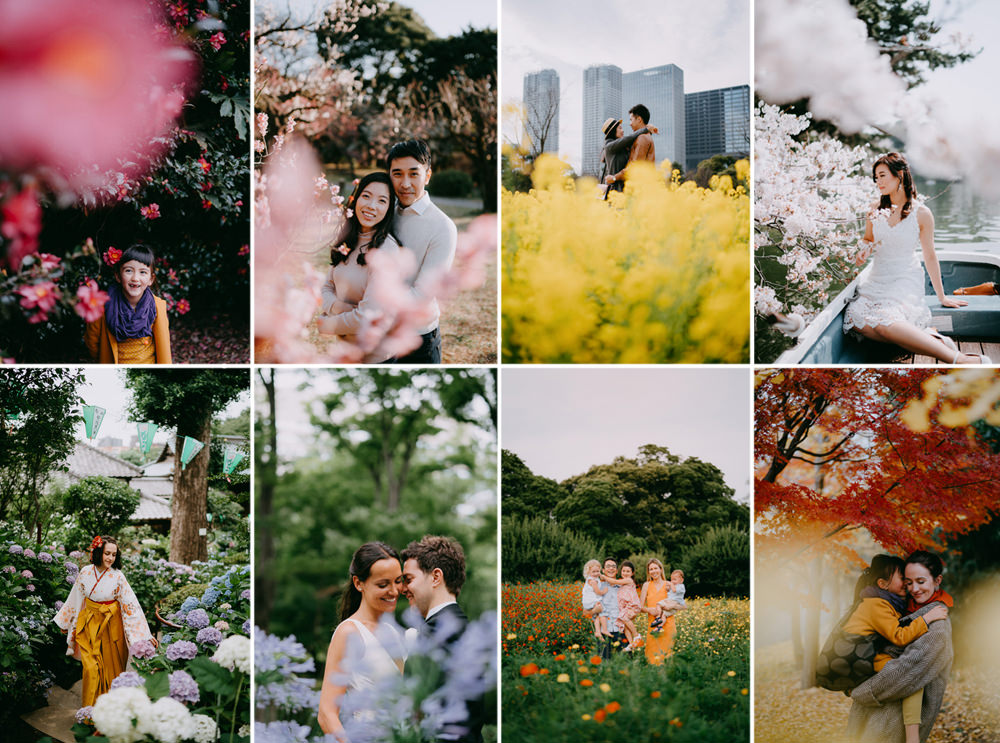 Camellia (December – March)
Camellia flowers typically bloom between December and March in central Tokyo. They are one of the only pink/red blossoms during mid winter, together with Plum blossoms. Camellia, a member of the tea family, has been cultivated in many parts of Japan for oil for both food and skin care (the beauty secret of Geisha’s for many centuries!). Moreover, they are also great for portrait photoshoots in mid winter, from surprise proposals to family photoshoots. 🙂 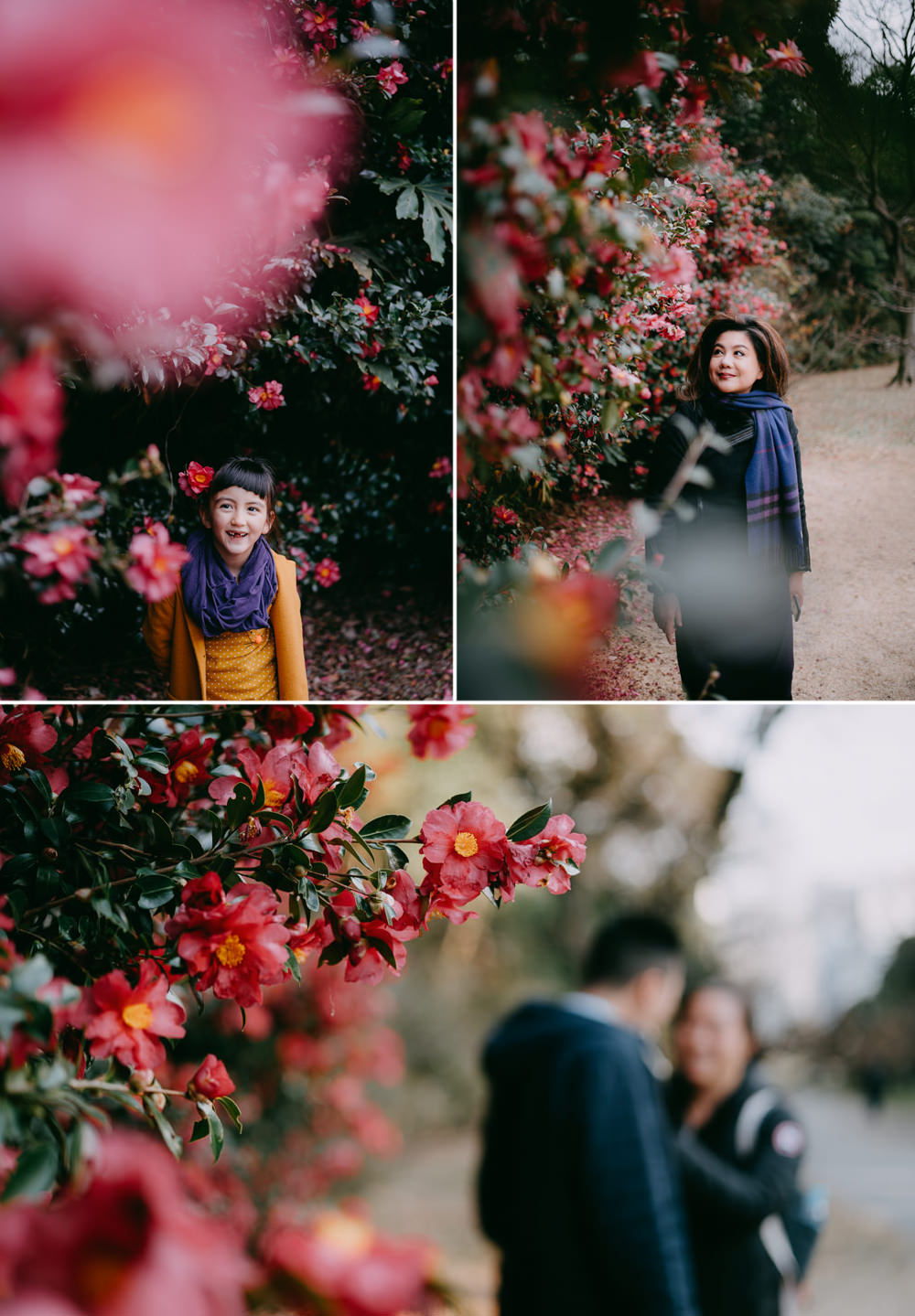 Ume Plum Blossoms (mid January – early March)
Ume Plum blossoms start blooming when the days start getting longer. Some types start blooming in January but many types reach full bloom in mid February, which is the reason why traditional Japanese new year decorations have always featured the motif of these Ume Plum blossoms as their full blooming time coincides with the traditional lunar new year. Some types of Plum blossoms are also photogenic as late as early March. Historically they have been a typical motif in ink wash paintings in Japan as they convey a more subtle delicate feeling than cherry blossoms, and make a great inclusion to any happy occasion such as engagement and pre-wedding photoshoots in Tokyo.

Canola/Rapeseed (mid January – late March)
Flowers of Canola/Rapeseed bloom as early as mid January in Tokyo, and they are seen as late as late March. For those who love yellow, it is a great time of the year to have a photoshoot with these vivid yellow blossoms! Photographers love this flower for its long blooming time and its happy yellow color. There are also a few places in Tokyo where we can include both Ume Plum blossoms and Canola blossoms in our portrait photoshoot sessions when the timing is right (late January to late February). 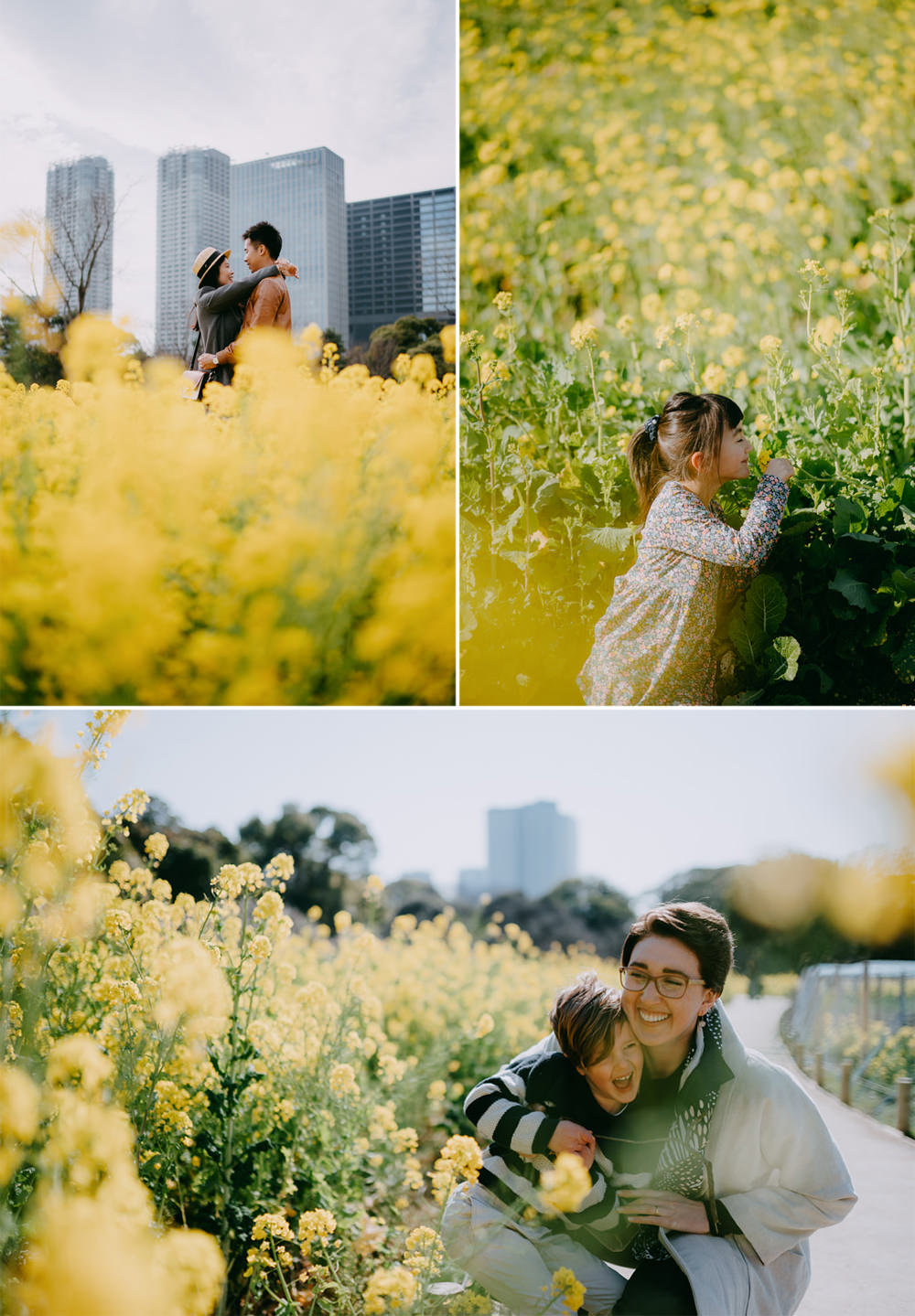 Early Blooming Varieties of Sakura Cherry Blossoms (late January – early March)
Have you arrived in Tokyo too early for the famous Sakura? Early blooming type Sakura Cherry blossoms are seen in limited parts of central Tokyo as early as late January. These early blooming types of Sakura (Kanhi Zakura, Atami Zakura, Kawazu Zakura, etc.) remain at full bloom for about one month, so they are photogenic even in late February, as opposed to the famous Japanese Sakura (Somei Yoshino) that stay at full bloom only for one week in late March/early April. 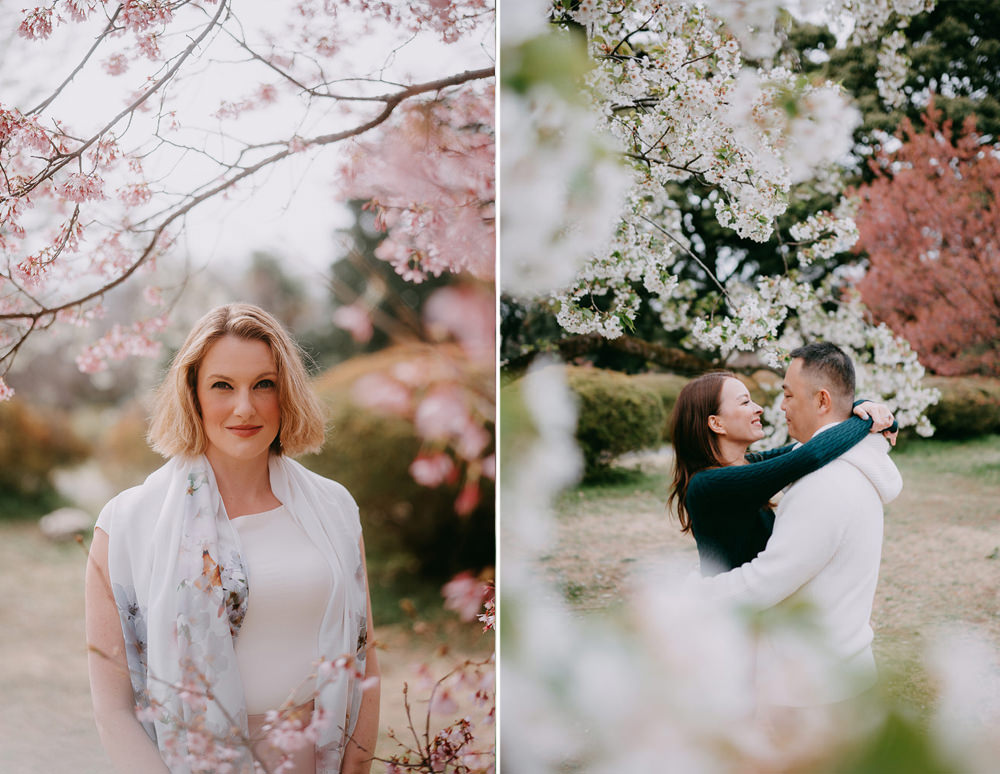 Iconic Sakura, The Most Famous Japanese Cherry Blossoms – Somei Yoshino (one week in-between late March and early April)
The main famous type of Sakura, the iconic Japanese Cherry blossoms (Somei Yoshino) is well known for its delicate and elegant beauty but it’s also known for its very short blooming time. After they start blooming, usually it takes a week to reach full bloom and they remain at full bloom only for a week (the most photogenic time) before the petals fall off and the leaves come out. Full blooming time can be shorter in some years since the petals fall off easily if there is a strong wind or heavy rain. The blooming time is very difficult to predict. Even though the average day of blooming in the last 2o years is 26th of March (full bloom on 3rd of April), it can vary significantly from year to year. For example, there have been some years in the last 10 years when these fleeting Cherry blossoms were over within March. They can bloom much earlier than average when January/February are colder than usual but March is as usual or warmer than usual. They can bloom later than average when January/February are warmer than usual, and March is as usual or colder than usual.

Japanese people cherish this variety of Cherry blossom (Somei Yoshino) so much more than the other varieties. It’s been said that it’s because Japanese people love the feeling of something fleeting; things that can last only for a very short period of time. These Somei Yoshino Cherry blossoms bloom around the time of the year when fleeting life-marking events happen, such as graduation ceremonies and company/school entrance ceremonies. It’s a nostalgic time of the year for Japanese who connect fleeting Cherry blossoms and the fleeing events of their own lives. Cherry blossoms in Tokyo are an amazing natural wonder and create a romantic feel in portrait photography, and from a photographer’s perspective they are perfect for occasions such as engagements and pre-wedding portrait photoshoots.

Sakura Fubuki – Falling petals of cherry blossoms (early April for Somei Yoshino)
Sakura fubuki, literally translated as a Sakura blizzard, also referred to as Sakura rain, is such a photogenic moment in the finale of the Cherry blossom period. It’s very difficult to plan such a photoshoot since usually it can only happen for a day or two even when the conditions are perfect. 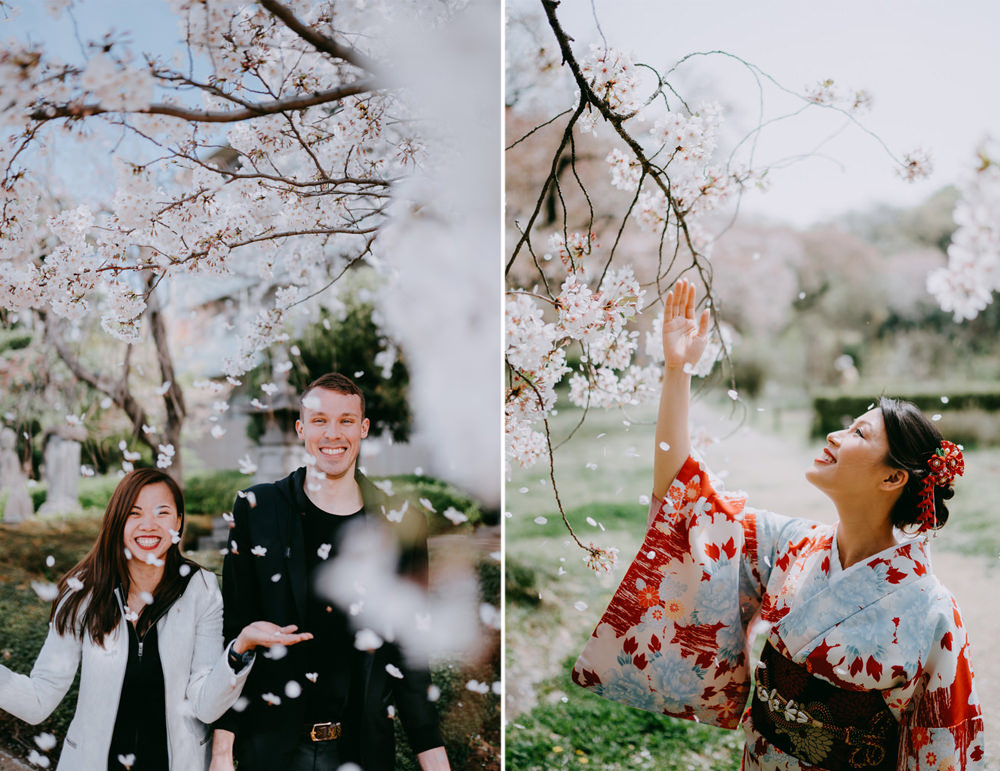 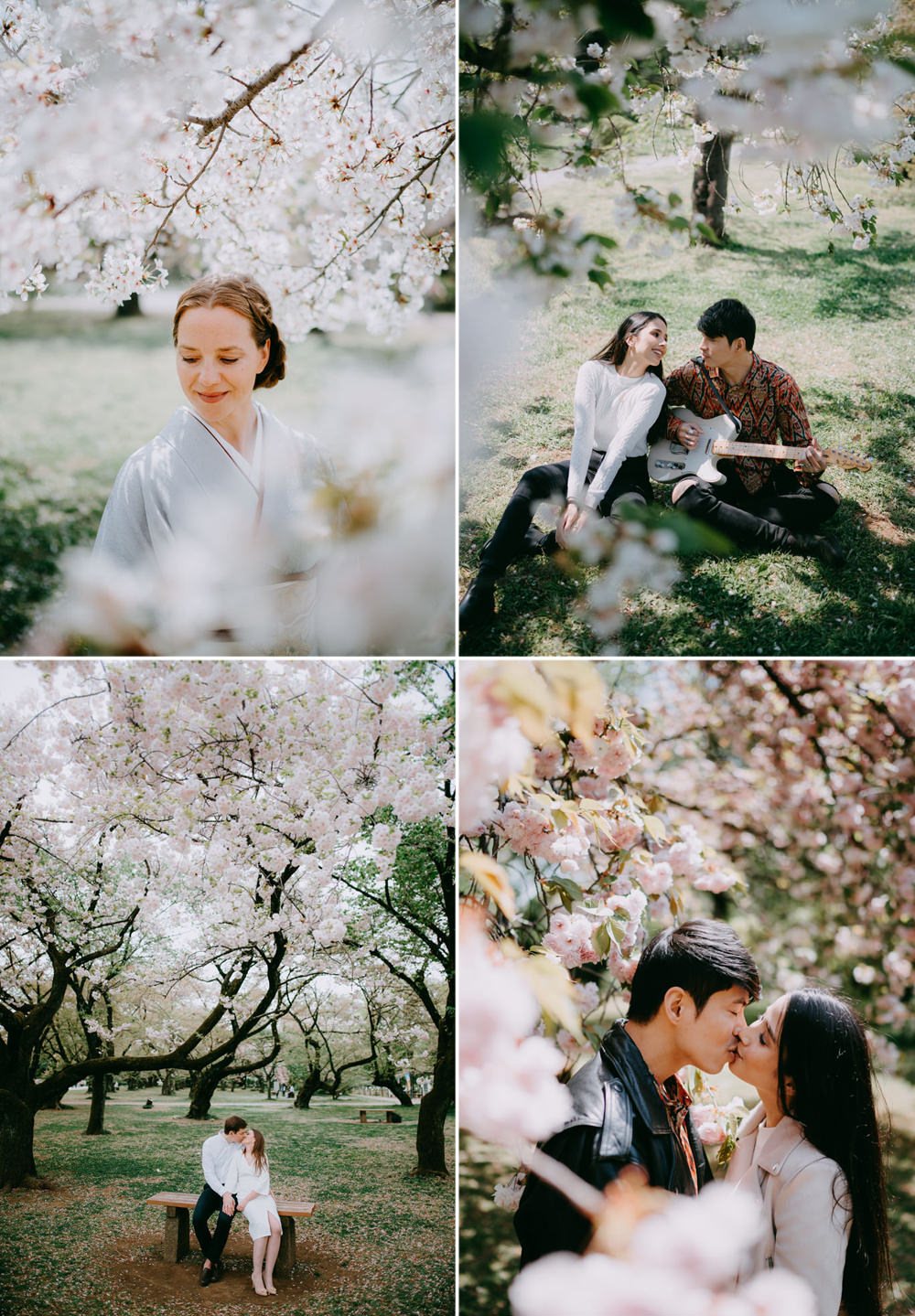 Azalea (April – May)
Azaleas are planted all over Tokyo so it is easy to incorporate these bright flowers into portrait photoshoot sessions (April-May). The vivid pink of the Azalea blossoms really pop in the sun light. Depending on the location we can also combine Azaleas with the late blooming type of Cherry blossoms in the same photoshoot (mid April). 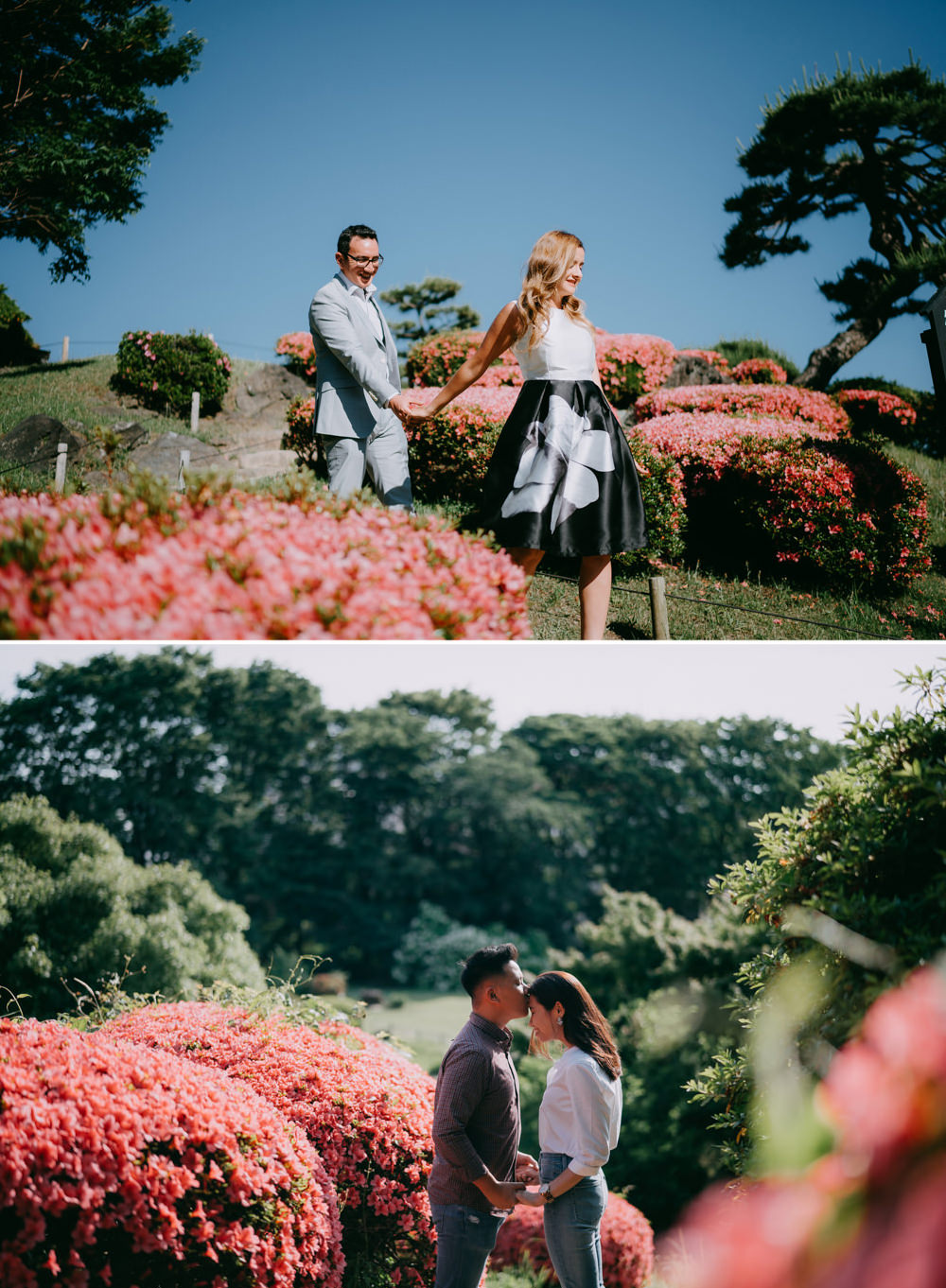 Wisteria (mid April – early May)
For those who love purple, the whimsical Wisteria blossoms are a must-see! Wisteria usually reach full bloom in mid-late April in Tokyo and stay photogenic until early May. In traditional Japanese theater, Wisteria can symbolize love, sensuality, and tenderness, making it a great flower for elopement, engagement and pre-wedding photoshoots in Tokyo. 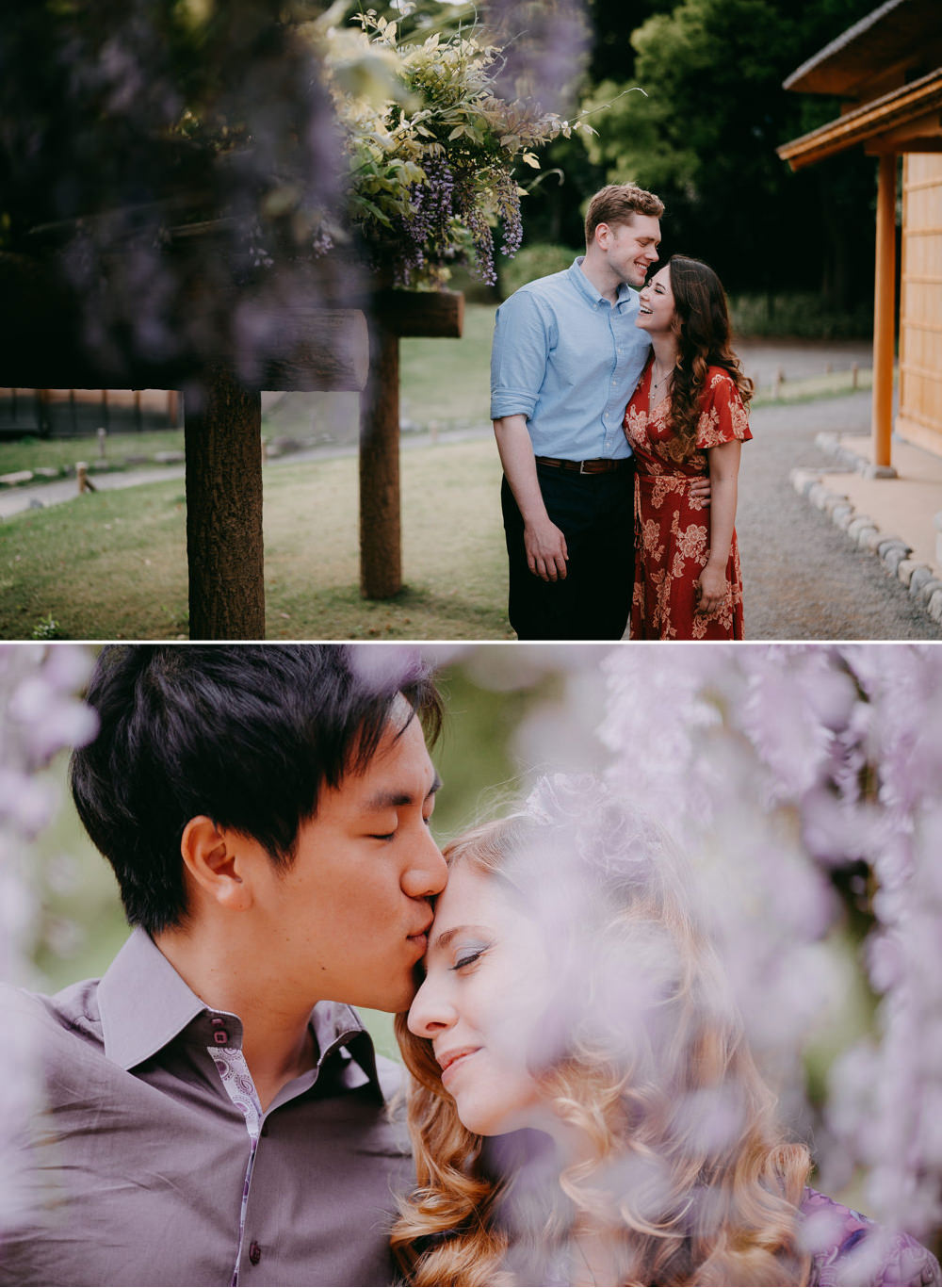 Iris (early May – late June)
There are only a few places in central Tokyo where you can have portrait photos taken amongst Iris flowers. They bloom from early May to late June in Tokyo, depending on the variety. Iris are more commonly seen in parks and gardens outside central Tokyo. Iris make a great inclusion in an early summer portrait photoshoot with their subtle pop of color amongst the greenery. 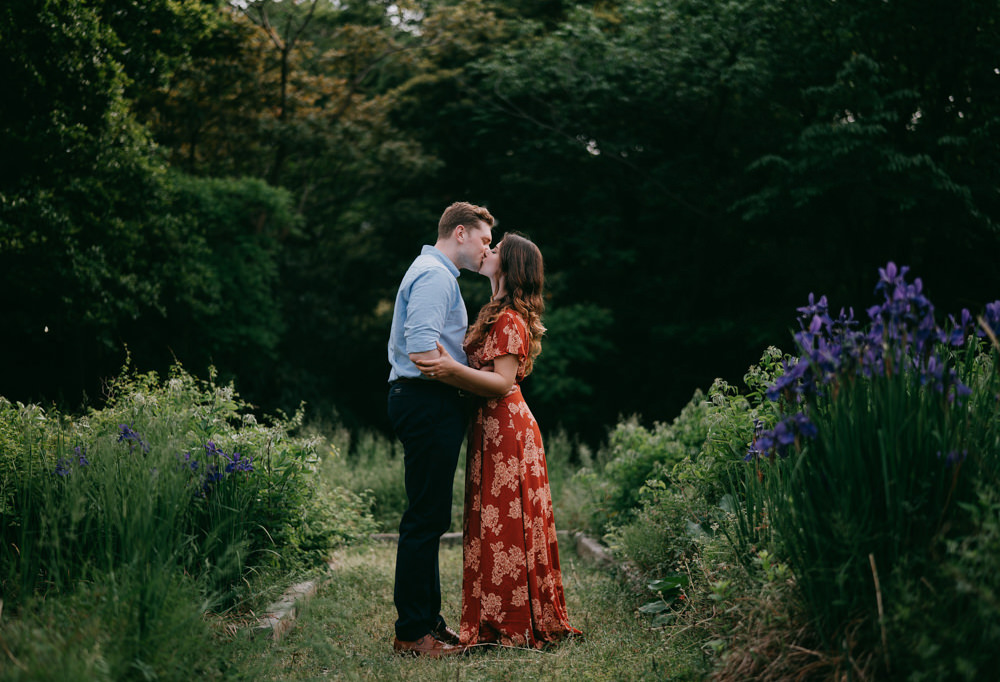 Hydrangea (June)
Originating from Japan and spread to the rest of the world, the Hydrangea is a very typical plant commonly seen all over Tokyo. There are more than a few varieties but many Hydrangeas are most beautiful in June during the rainy season. The rainy season can be inconvenient when it actually rains a lot (in recent years it has become unpredictable), particularly for visitors to Japan who have limited time for their pre-wedding or engagement photoshoot, however it often doesn’t rain much. From our experience as photographers, rain (and Hydrangeas!) can add a beautiful element in portrait photography. 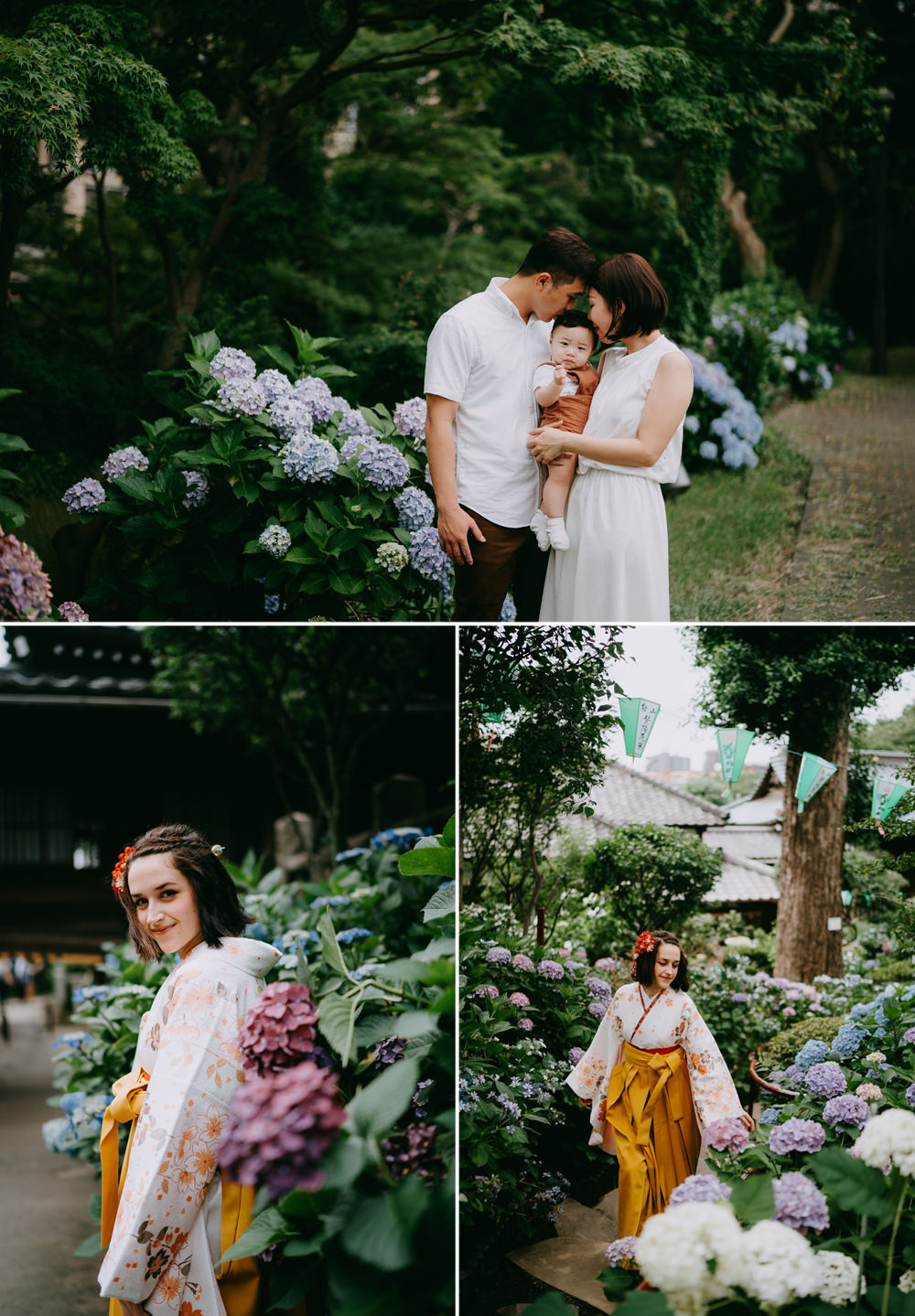 Agapanthus (June)
Together with Hydrangea, Agapanthus blossoms are known as a flower of the rainy season in Mainland Japan. There are a few places in central Tokyo where we can take portrait photos surrounded by Agapanthus flowers (June). 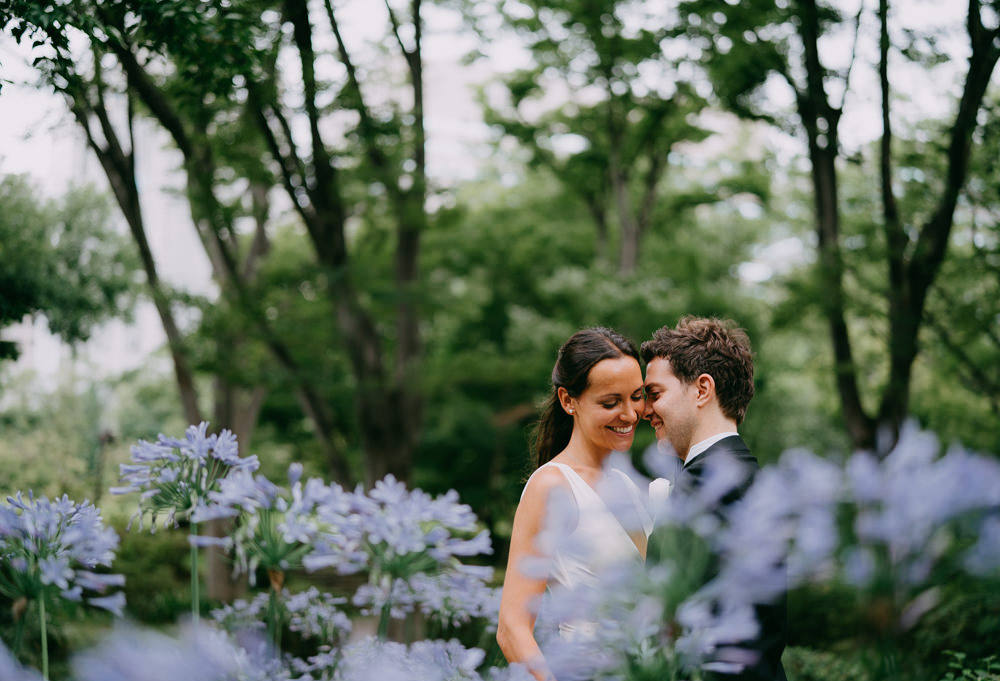 Cosmos (August – October)
Whilst Sun flower fields are rare in central Tokyo (they are much more common in rural Tokyo), there are a few beautiful locations for Cosmos flowers which are great for portrait photoshoots between August and October. There are a few different varieties of Cosmos flowers, with one orange type that looks like Marigold flowers.

Red Spider Lily (late September)
Flowers of the Red Spider Lily are considered as the iconic closure of summer in Mainland Japan. The blooming time can vary from year to year but they usually bloom around the September Equinox (September 21-24) in Tokyo. The vibrant colors add great pop to portrait photography. There are several amazing spots in central Tokyo where we can shoot amongst these beautiful red colors. 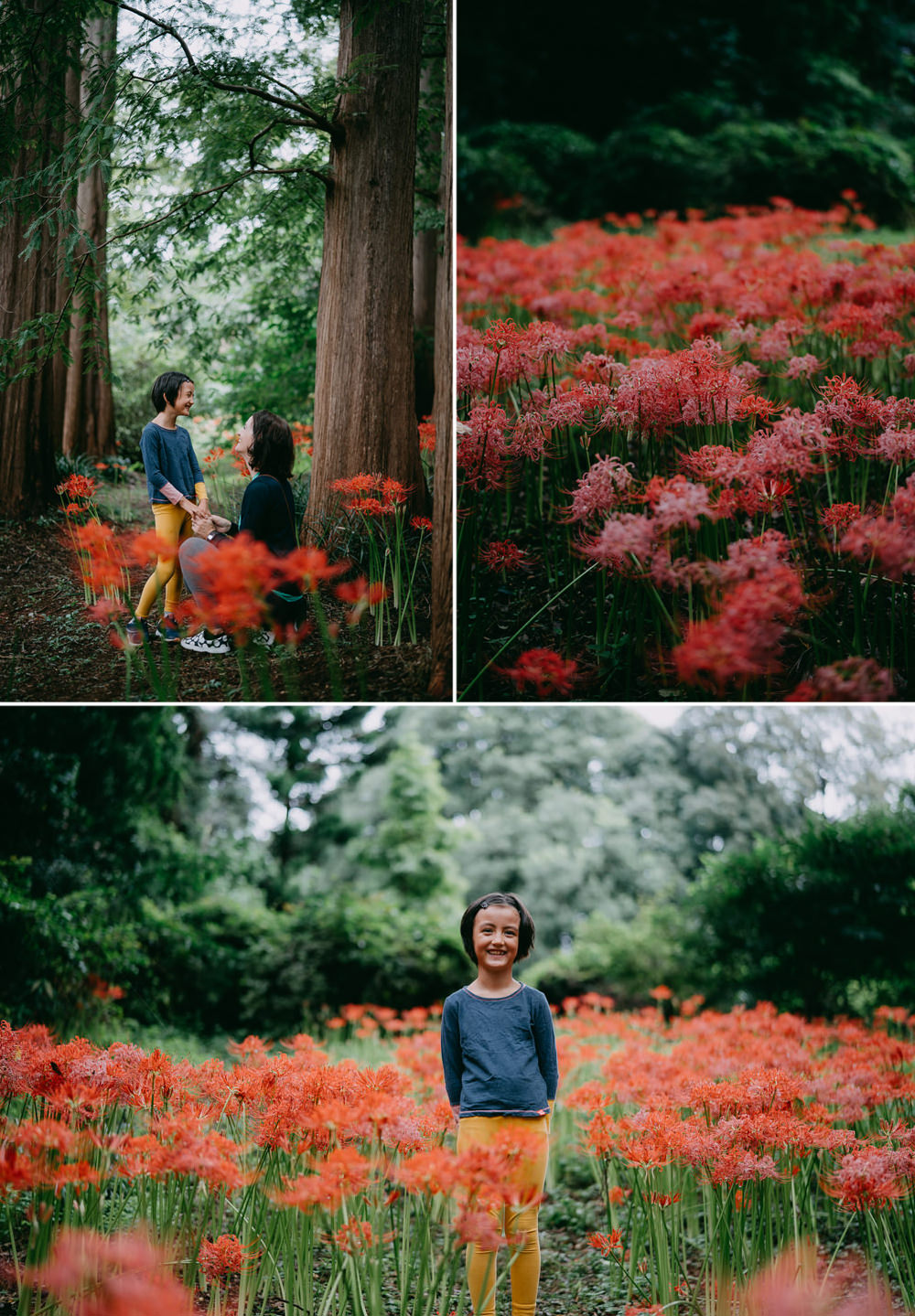 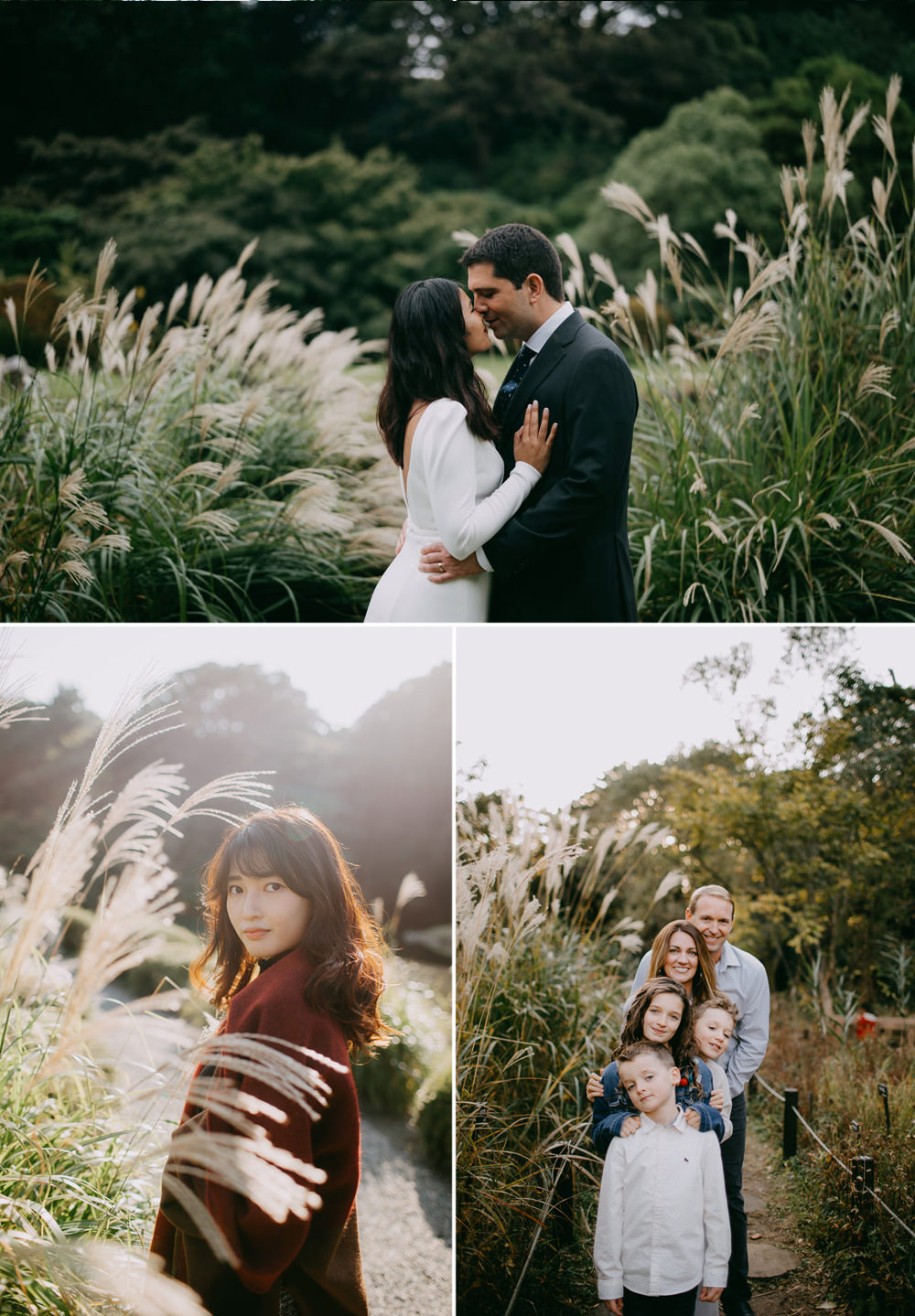 Ginkgo (late November)
Tokyo’s autumn/fall is famous for the vibrant yellow leaves of Ginkgo trees commonly seen all over the city (late November). The best time varies from year to year but late November seems to be the safest time to plan a photoshoot with the yellow leaves of Ginkgo trees. Ginkgo trees are seen everywhere in central Tokyo from parks and gardens to busy commercial streets.
Since ancient times, because Ginkgo trees are burn-resistant and known as fire blockers, they have been planted alongside streets leading to parks which are designated as evacuation areas in Tokyo. From a photographer’s perspective, portrait photoshoots around this time are great for family portraits as it’s fun for everyone to throw the leaves! The yellow Gingko leaves are very popular also for our pre-wedding and engagement photoshoots. 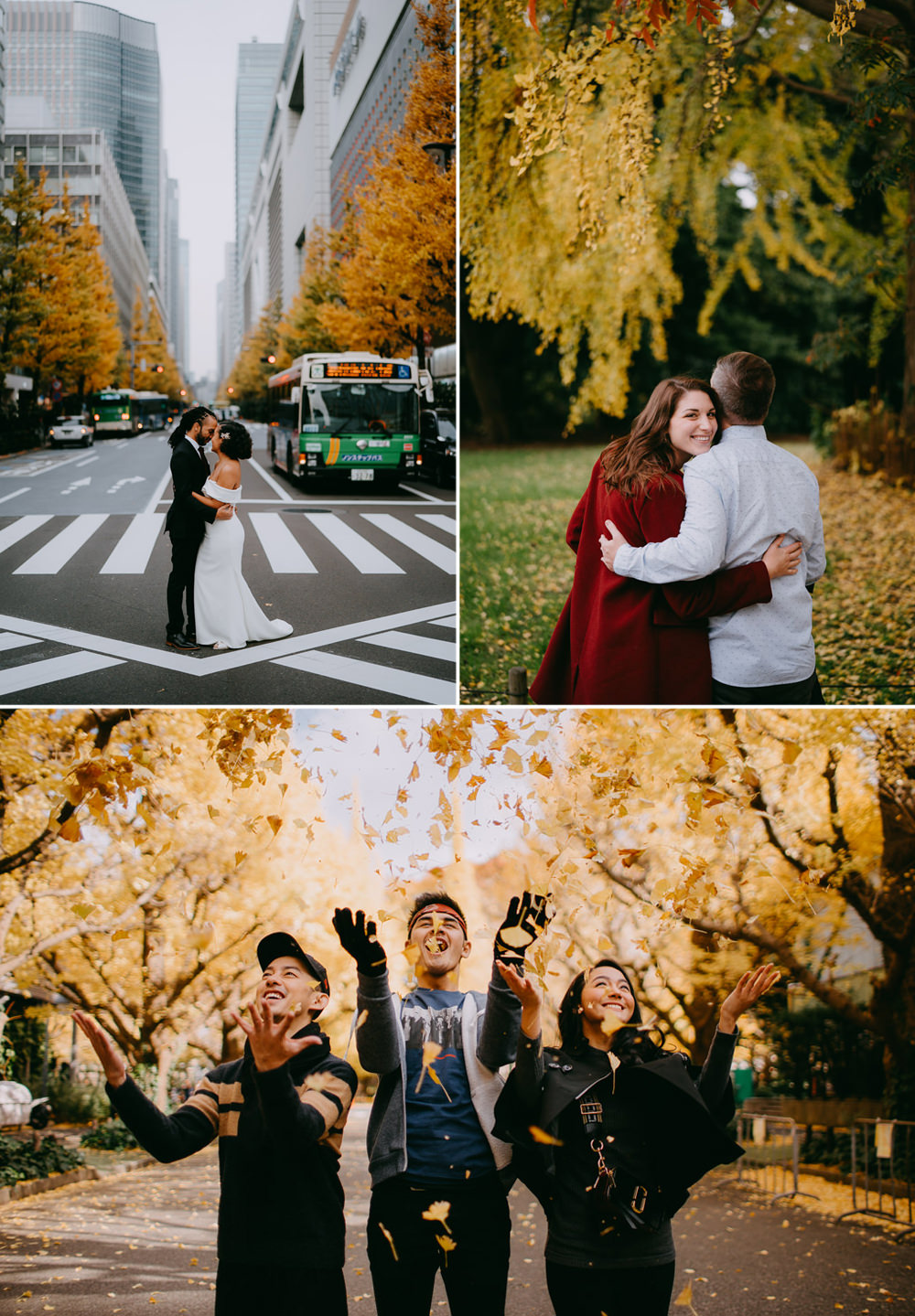 Japanese Maples (December)
The Tokyo autumn/fall scene reaches its climax with the vivid red and orange colors of Japanese Maple leaves. In most places in central Tokyo, they turn red and orange in early December, and mid December is often the best time for portrait photoshoots with vibrant red Maple leaves at our preferred locations in central Tokyo. For those who can only come to Tokyo during the Christmas/New Year holiday, you can still have your portrait photoshoot with these gorgeous colors since Japanese Maples often remain beautifully red even after Christmas in some parks and gardens in central Tokyo in recent years.

Japanese Wax Tree (mid – late December)
Together with Japanese Maples, Japanese Wax trees show vibrant colored leaves in December, often even after Christmas in some parks and gardens in central Tokyo. Some years, Japanese Maples don’t turn vibrantly red due to damage from salt by typhoons and other weather conditions, but the Wax trees turn beautifully red every year. 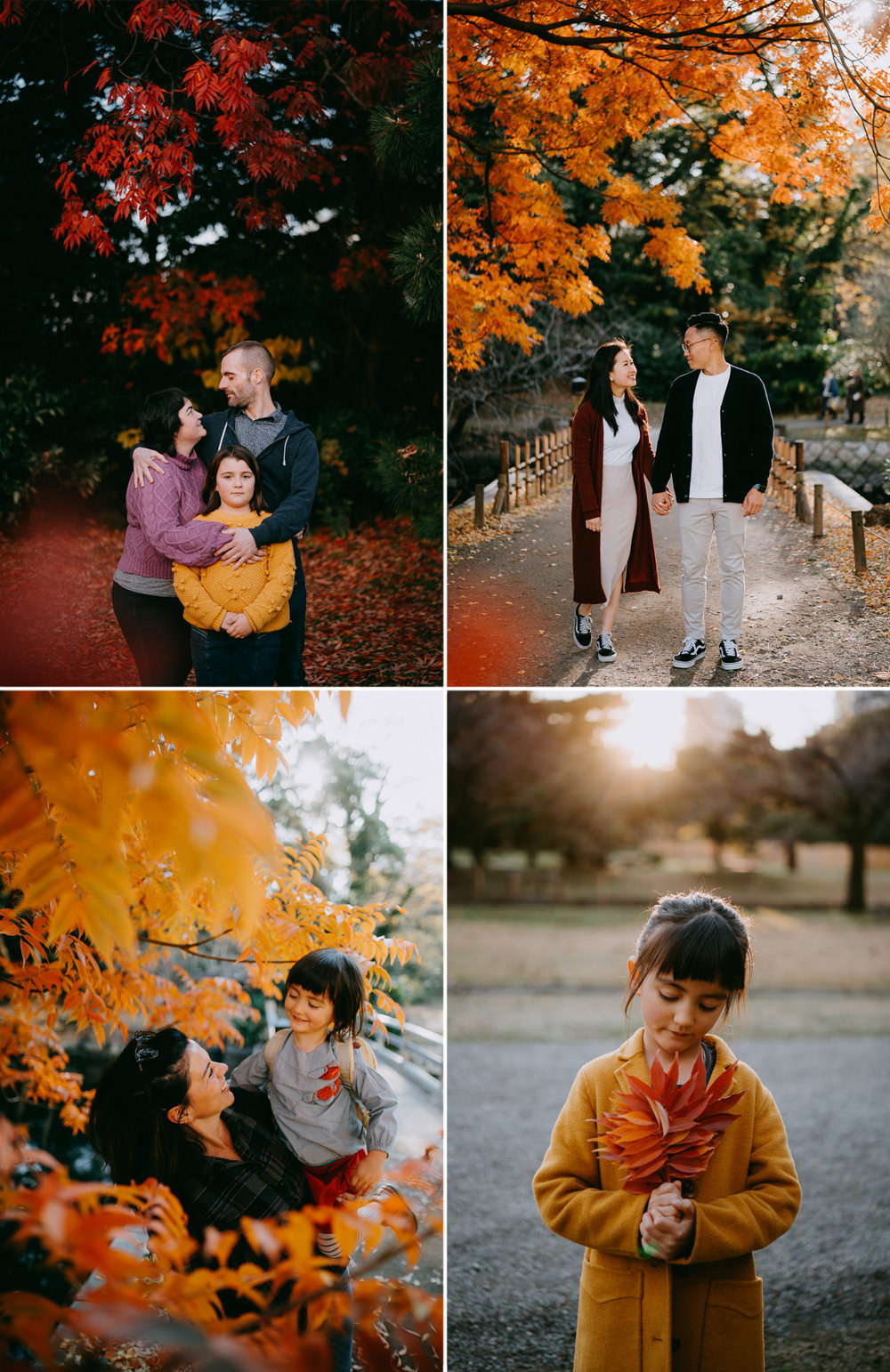